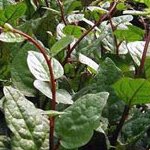 Red-stemmed malabar spinach is deliciously stunning vine, and a favorite hot-weather vegetable, especially in the Carribbean. Versatile in the kitchen, and delicious to eat, this vigorous vine is unrelated to true spinach (Spinacia oleracea) but produces abundant large meaty leaves that are remarkably spinach-like in taste and form. The plant is also much better suited for summer growing than its better-known namesake. Basella rubra goes by many other common names besides Malabar spinach, including Ceylon spinach, Indian spinach, vine spinach, and Malabar nightshade. Native to India and Indonesia (Malabar is a coastal region in southwestern India), the plant is used in traditional cuisines as far westward from its point of origin as Japan and eastward as Africa. It has also been introduced to South America and the Caribbean. Straight species Malabar spinach has yellowish stems and green leaves and is a pleasing enough plant, but it’s the red-stemmed cultivar ‘Rubra’ that really catches the eye (whether it’s growing in a pot or lounging in a salad bowl). The thick red stems contrast wonderfully with the round, highly textured, two- to four-inch-long dark green leaves. Red venation in the leaves adds another level of color contrast. Malabar spinach can grow eight to ten feet tall and wide and produces inconspicuous white-tinged pink flowers in its leaf axils. Upon fertilization, the flowers develop into small, highly ornamental, single-seeded purple berries. The juice from the berries is so intensely purple that it puts beet juice to shame. It’s used as a natural food colorant for agar (vegetable “gelatine”) dishes, sweets, and pastries. Malabar spinach excels in warm, tropical areas, where it can easily grow a foot per day. It’s intolerant of any chills; thus, the only regions in the U.S. where it would be perennial are the Deep South or southern Florida. Gardeners in colder climates can grow it as an annual. It prefers a humus-rich, sandy loam in full sun. Malabar spinach is amazingly insect and disease resistant, and that is saying a lot down here in South Florida, where legions of caterpillars and grasshoppers can decimate an entire planting overnight, yet the spinach remains untouched! The succulent leaves and stem tips are rich in vitamins A and C and are a good source of iron and calcium. They may be eaten raw in salads, boiled, steamed, stir-fried, or added to soups, stews, tofu dishes, and curries. Or you can use them as a filling for quiche, omelets, savory turnovers, and potpies. Since red-stemmed Malabar spinach can lose a lot of its red color when cooked, perhaps it is best utilized (visually speaking) in raw dishes.