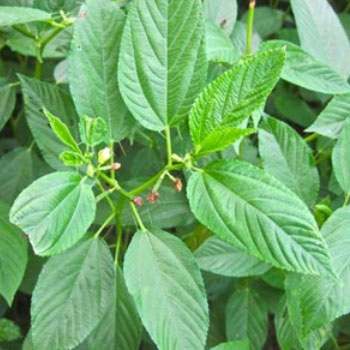 Another spinach substitute, this one is from the Middle East instead of the Carribbean. Also known as Jews Mallow or Jute, it grows well in hot humid places, and it is a great leafy green vegetable during our South Florida summers when little else grows. Similar to Okra, it has a viscous consistancy when cooked, but eaten raw has a nice earthy taste that goes well in salads. In Egypt there is a special soup made of ground Molokhia powder with lemon and spices. Nutritionally it is loaded with vitamins and minerals. It will take hot growing conditions as long as it gets adequate moisture. Some of the most prominent nutritional components of molokhia include fiber, magnesium, phosphorous, iron, potassium, calcium, and selenium, as well as vitamin C, E, K, B6, A, and niacin. With three times more calcium and phospherous than kale, and four times the amount of riboflavin, it also contains certain antioxidant carotenes and antioxidant elements, making a well-rounded and highly beneficial addition to your diet!

Molokeyhia Spinach can be used like traditional spinach in any recipe that calls for spinach. The same can be said for any of the tropical spinach substitute varieties.

* can substitute vegetable broth to make it vegetarian

1 rabbit, duck, beef, small chicken, or any other meat desired

To prepare the meat rub well with flour and then rinse and cut the meat into 5 parts and put into a large mixing bowl. You can remove the skin or leave it on, your choice.

In a small bowl mix 1 tbsp of crushed garlic, the juice of 1 lemon and some salt. Rub the marinade into the meat, cover and refrigerate for 1 hour. This helps tenderise the meat as well as draw out any fluids and impurities.

In a large stockpot, bring 1 quart of water to boil. Add bay leaves, salt and the onion halves. Set aside.

In a large frying pan, melt 2 tbsp of butter. Add the pieces of meat and brown. Add the browned meat pieces to the stockpot and boil for approximately 25–30 minutes, until the meat is tender. Strain and reserve 5 cups of the stock.

In the same frying pan, add 2 tbsp butter, salt, pepper and garlic and fry the meat until golden. Remove and arrange portions on a serving platter.

In a deep pot bring the reserved broth to the boil. Reduce the heat, add the molokhia and leave to simmer, uncovered, for 10 minutes. Add more broth if the texture is too thick.

Garlic Sauce
While the molokhia is boiling, in small saucepan heat 1 tbsp butter, the remaining garlic (approx 2 tbsp), coriander and stir until golden brown. Pour the garlic sauce immediately into the molokhia.

Season to taste. Remove from heat and half cover the pan for 2 minutes.

Serve the molokhia in a bowl with the meat separately on a platter, or combine both in one deep bowl. Accompany with a lemon wedge and rice.

For preparing the chicken:

How to make Molokia Sauce:

Wash the molokhia well by soaking it for 10 minutes in water. Rinse well. Spread on large kitchen towel to dry. Remove all the molokhia stems and discard them; you only need the leaves. If you are using frozen molokhia make sure that there are no stems.

Cut chicken from the middle and wash well. After that, scrub the chicken with 1/2 a lemon, leave it for a few minutes then rinse.

Place all the ingredients for preparing the chicken in a pan, add water to cover (12-13 cups). Cook, covered, over medium heat until chicken is tender. Remove the chicken from the water and leave on a tray to cool. While still warm (easier to handle), remove all the skin and bones.  As for the chicken broth, pass it through a sieve. Keep the 10 cups you need for this dish and store remaining amount in the fridge for later use.

Heat the oil, add the onions and garlic and sauté until onions are just about to start turning yellow. Add the coriander and molokhia leaves and toss for two minutes. Add the cooked chicken, chicken broth and salt, mix well. When sauce starts to boil reduce heat and simmer, covered, for 30 minutes.

After the dish cooks for 30 minutes, add the chopped tomatoes and fresh lemon juice and simmer, covered, for another 20 minutes.

Molokhia is customarily served over brown or white rice.